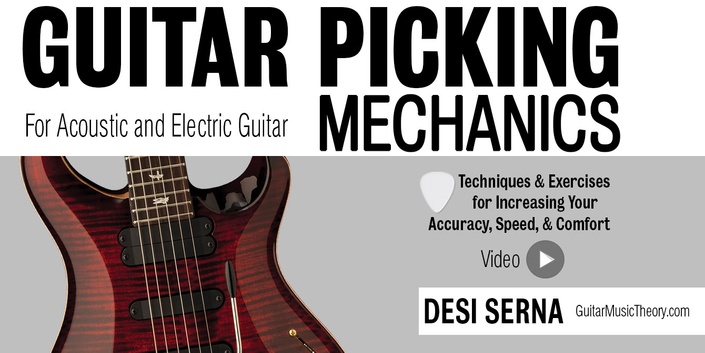 Techniques & exercises for increasing your accuracy, speed, & comfort for intermediate level players and up

The coupon code you entered is expired or invalid, but the course is still available!

Do you find yourself struggling to play guitar parts even though you know exactly where to place your fretting fingers?

If yes, you are not alone. It is a common problem.

Playing certain passages can be a real struggle. And when you struggle, you lose confidence. We have all been in that place where we dread an upcoming guitar part in a piece of music because we do not know whether or not the notes will come out right. Has your gut ever filled with fear in those situations? It happens!

A lot of guitarists miss strings when they play, and fail to play fast enough to keep up with the music.

I would not be surprised if your hands frequently tire out and get stiff too. When something is difficult, you tend to overwork trying to get it right. Then, your playing worsens. It is a vicious cycle.

Sometimes you practice a part over and over and you still make mistakes. This causes you to feel stuck in a rut, like you will never progress to the level you want to achieve. That is no good. 🙁

If you are struggling to play guitar parts and failing to progress, the problem may be something you have not thought enough about: Your picking technique. I am talking about how you use a standard guitar pick (a.k.a. flatpick or plectrum).

Think about it: Half of guitar playing is picking. Yet the majority of guitar instruction pays little attention to this important technique. Instead, most of the focus is on the fretting-hand fingers. Apparently, if you know where to place your fingers, everything else is supposed to fall into place. But in many cases it does not. That is when your playing suffers. In fact, so little attention is given to the picking hand that you may have not even considered it to be the root of your problems.

Generally speaking, guitarists do not have trouble with their picking technique when playing slow passages. In these situations, a special picking technique or strategy is not often necessary. Technical problems seem to sneak in when faster picking is needed.

By faster, I do not mean blazing fast or “shredding” necessarily. Many common guitar riffs and solos found in popular styles of music are played at only moderate rates. But even then, you may find that the music can trip up your accuracy, especially if you have not planned out your picking.

You may think, “What is there to plan out? I either pick down or up. It is not rocket science.”

The reality is, there is a lot more to picking than just down and up. There are many things to take into consideration. These things can mean the difference between playing a passage flawlessly and falling flat on your face!

Some factors that affect your picking technique include:

If you have not given much thought to the aspects of picking listed above, you should see why you have been struggling to pick proficiently.

Great guitar players do not leave their picking skills to chance. Instead, they get to know all the fine details of guitar picking, and then they take advantage of techniques that increase their accuracy and efficiency. They get rid of bad habits that slow them down, and they always have a plan in place so that they play their parts correctly each time. On top of all of this, they eliminate stress and strain and stay relaxed and comfortable while they play.

Developing a solid picking technique requires you to develop a strategy on how to approach your picking in each situation. With a plan in place, you will realize you are capable of far more than you might have previously thought.

Your path to picking improvement involves the development and application of the following techniques:

You simply cannot play guitar fluidly without intentionally focusing on the development of these techniques. If you are unsure about any of them, you have work to do.

You have probably seen picking techniques taught by other instructors. The problem is, these instructors play heavy metal styles of music and pick at the absolute fastest rates possible. They will lead you to think you need to be a head-banger and an advanced player to learn how to improve your technique. This is not so.

Picking techniques are used in all styles of music, not just in heavy metal. This includes all the familiar acoustic and electric guitar songs you hear on classic rock radio stations.

And picking techniques are not just about playing at an advanced level or playing super-fast. They are about playing better at any level and any rate of speed.

This is where the Guitar Picking Mechanics video course comes into play.

The Guitar Picking Mechanics video course equips you to play popular styles of music as proficiently as possible by training you to use the proper techniques needed to play common guitar parts. The process is not all about playing tedious drills over and over all day. Sure, there are exercises. But you will also discover techniques that will make an immediate difference in how well you pick, so you will see fast results. You also play examples composed in the style of familiar songs, so you learn the most practical skills. You even apply your newfound skills to your own improvisations and compositions so you make great music while you get better.

After completing Guitar Picking Mechanics, you will be able to pick more quickly, more accurately, and more comfortably. You will know how to compose fluid lead lines around efficient mechanics. Most importantly, you will discover which picking techniques work best for you so you can play to your strengths.

Guitar Picking Mechanics is not just about technique—it is about your artistic expression and style. The program’s goals are for you to explore options, develop new skills, break through barriers, and make progress so that your guitar playing becomes something you can be proud of. 🙂

Guitar Picking Mechanics is not a beginner guitar program. In order to take full advantage of this instruction, you should already be playing at an intermediate level. Your skills should include being able to play pentatonic scale and three-notes-per-string scale patterns. Guitar Picking Mechanics works on either an acoustic or electric guitar. Both right-handed and left-handed guitar players can follow the lessons.

Ready to get started? Click the Enroll button now! 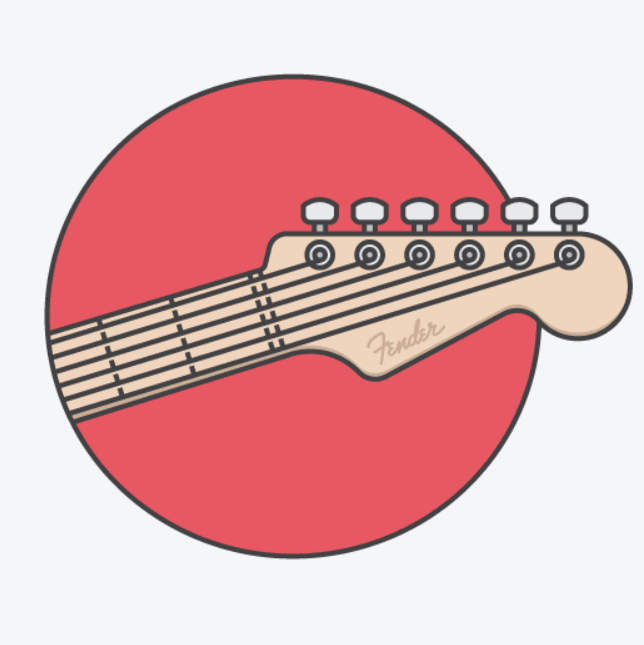 "Although I’ve played for 15 years, I’ve only played sing-along songs on an acoustic guitar. I never paid attention to other guitar styles and techniques. I recently bought Guitar Picking Mechanics and have been working my way through it thoroughly every day with a metronome and a practice diary. I cannot believe how much my picking is improving. The fluency and accuracy of my fingers moving like they are now is something I used to dream about when I was a teenager. I just always thought it was out of my league. It’s so good to be in love with music again and enjoying the journey of skill-building." 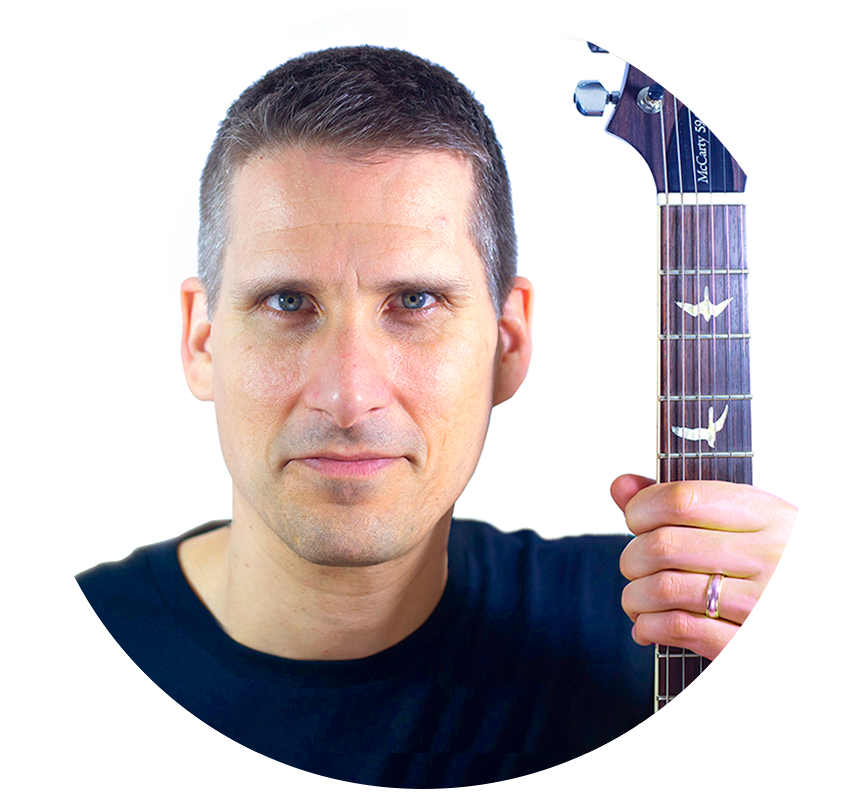 Hailed as a “music-theory expert” by Rolling Stone magazine, Desi Serna is the author of several instructional guitar books and video courses. He hosts one of the most popular guitar podcasts on the Internet and has millions of views on YouTube. Desi is known for his practical, hands-on approach to music teaching, with a focus on the guitar fretboard and emphasis on popular songs. He honed his craft through decades of teaching, performing, and publishing. He lives in the Nashville, Tennessee area, and works full-time managing his GuitarMusicTheory.com website and related content.

When does the course start and finish?
The course starts now and never ends! It is a completely self-paced online course - you decide when you start and when you finish.
How long do I have access to the course?
How does lifetime access sound? After enrolling, you have unlimited access to this course for as long as you like - across any and all devices you own.
What if I am unhappy with the course?
We would never want you to be unhappy! If you are unsatisfied with your purchase, contact us in the first 30 days and we will give you a full refund.
Is the course fee a one-time payment or recurring fee?
One-time payment. No recurring fees.
Will Guitar Picking Mechanics help beginners?
No. Guitar Picking Mechanics is meant for guitarists who are well past the beginning stages of learning and have no trouble playing songs, using barre chords, and so on. You should also be familiar with pentatonic and major scale patterns.
off original price!

The coupon code you entered is expired or invalid, but the course is still available!